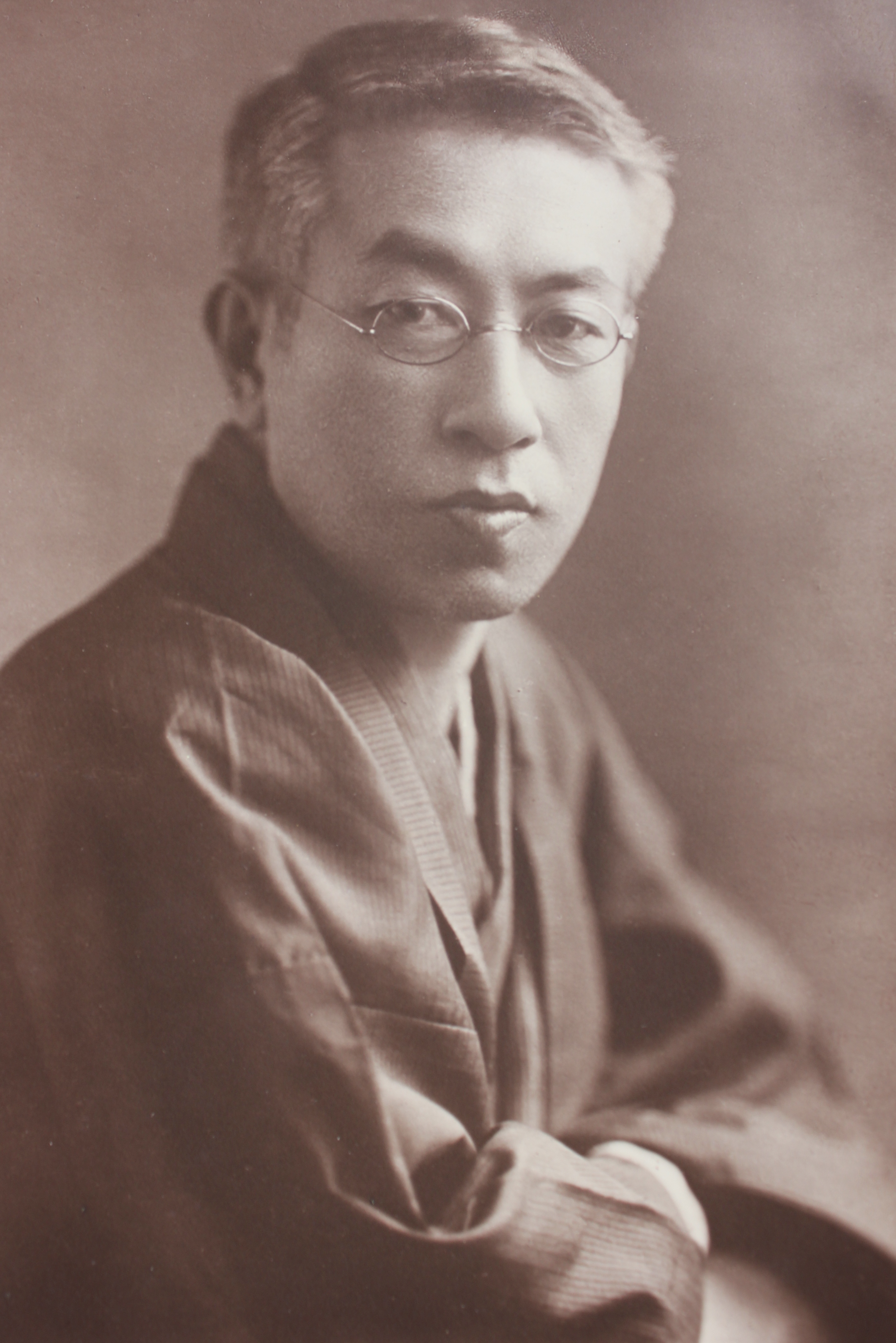 Shimazaki Toson (1872-1943)
He was born on March 25, 1872 at an old "honjin" (officially appointed inn on the Nakasendo Highway in the Edo Period) in Magome-juku.  In 1881, at the age of 9, he went to Tokyo and entered Taimei Elementary School.  After graduating from Meiji Gakuin University, he started to contribute his essays to a magazine.  In 1892 he was so moved by the critical essay "Enseishika-to-Josei" (A Pessimistic Poet & His Girlfriend) by Kitamura Tokoku (1868-1894) that he helped to start a new magazine, called "Bungakukai."
After teaching at Meiji Women's High School and Tohoku Gakuin University, he published his first collection of poems "Wakana-shu" (Young Greens) in 1897.  He made his first literary step as one of the representative romantic poets of modern Japan.  He followed this with "Hitohabune" (A Small Boat) and "Natsukusa" (Summer Grass).  In 1899 he left for his new post in Komoro Gijuku Junior High School and married Miss Hata Fuyuko.  He published his fourth collection of poems "Rakubai-shu" (Fallen Japanese Apricots).  "Chikuma-gawa Ryojo-no-Uta" (A poem of a Journey along the River Chikuma) and "Yashi-no-mi" (A Coconut) are still widely known and sung.
He gradually shifted from poet to prose writer.  In 1905 he went up to Tokyo again and the next year published his first novel "Hakai" (The Broken Commandment) at his own expense, making up his mind to live solely by his pen.  He then published "Haru" (Spring), a novel based on his friendship with Tokoku and "Ie" (The Family), a novel depicting the down-fall of two old families.  These works made him a representative writer of naturalistic literature in Japan.  In 1910 his wife Fuyuko passed away, leaving behind their four little children.  In 1913 he went to France.  During his stay there he witnessed the horror of World War I, then came back to Japan in 1916.  On his trip to France, he published essays, books for children, and the novels "Shinsei" (New Life) and "Arashi" (Storm).
In 1928 he married Miss Kato Shizuko.  From 1929 to 1935 he published "Yoake-mae" (Before the Dawn) in monthly parts in the magazine "Chuokoron."  It was highly regarded as good historical novel depicting the life of a man, modeled after his father, before and after the Meiji Restoration.
In 1935 he became the first chairman of the Japan PEN Club.  In 1936 he left for Buenos Aires to represent Japan in the 14th International Meeting.  In 1943 he collapsed while writing the novel "Toho-no-mon" (The Gate to the East) at his home in Oiso-machi and passed away at the age of 71 on August 22, 1943.


Layout of the Toson Memorial Museum

Layout of the Toson Memorial Museum


A Collection of Poems and Novels

The Toson Memorial Hall
Designed by Dr. Taniguchi Yoshiro in the Nara Period style.  In the center of the yard, there still exists a foundation stone of the old inn, and peonies bloom in May every year.  One can enjoy a fine view of Mount Ena in the front, and the woods that surround Eishoji temple the back.
Grandparents’ Retreat
(Cultural Asset designated by Nagano Prefecture)
Most buildings of the old "honjin" were burnt down by the great fire in 1895 except his grandparents' retreat.  In a room upstairs Toson received rigorous training from his father in the Four Books and Five Classics of Confucianism.  The description of his training frequently appears in "Before the Dawn" and other stories.